Groz-Beckert plays an active part in a charity event

The "Trail 2011" was a charity walk initiated by Mr. Sarinda Unamboowe, CEO of MAS Linea Aqua. It ran from Dondra Lighthouse, the southernmost point of Sri Lanka, to Point Pedro, the island's northernmost point, and lasted from July 1 to 27, 2011. As a partner of MAS and a socially responsible company, it was a matter of course and also highly enjoyable for Groz-Beckert to take part in the charity walk and support the project.

The Charity Walk 2011 – A journey by the living. For life

All the money raised and still to be raised by Trail 2011 goes to the organisation "Colours of Courage Trust." The money will help to fund construction of a paediatric cancer ward at the Jaffna General Hospital.

It was Mr. Unamboowe from MAS Linea Aqua who first had the idea of the Trail. He planned to walk the length of the country together with numerous supporters as a mark of his commitment to peace, after the ethnic conflict and civil war in Sri Lanka came to an end. Now Mr. Unamboowe has been able to fulfil his promise. His longtime friend and colleague Mr. Nathan Sivaganananthan, CEO of MAS Intimates, MAS Design and also Director of the Colours of Courage Trust, decided to help, and transformed the original idea into a unique fundraising initiative.

To help young children suffering from cancer, Trail 2011 was jointly initiated by Mr. Sivaganananthan, Mr. Unamboowe and those behind the Colours of Courage Trust.

Today the initiative has received donations totalling more than 1.5 million US Dollars, and the organisers are still working on achieving the 2 million US Dollars necessary for the project's realisation. For further information please visit www.trailsl.com. Support is still very welcome, whether through a donation or the purchase of merchandising or promotion articles. All offers and further information can be accessed on the homepage.

Groz-Beckert supports a good cause

Represented by Mr. Tarique Gunasekera and Mr. Chinthaka Perera, Groz-Beckert took part in the final stage of the charity walk. 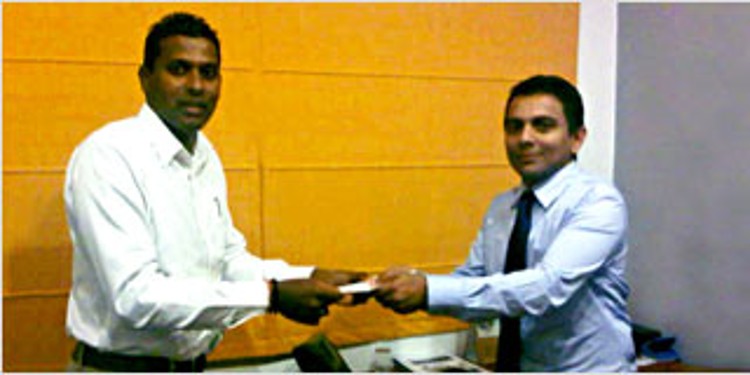 After finishing the walk, Mr. Gunasekera was able to donate a cheque to MAS and the Colours of Courage Trust. It was actually the highest donation so far received from any suppliers of the MAS Group. Groz-Beckert sees this as a small contribution to an outstanding event. The charity walk is an important milestone in the future development of the North of Sri Lanka and the peaceful future of the country as a whole.