Those tying multi-coloured warps will find everything they are looking for in the powerful and user-friendly Knotex Knot Control computer control. A dialogue-based operator guide in 7 languages, with 999 programmable repeating patterns plus a stop-location input option, makes daily knotting in weaving mills for clothing material and shirt material far easier.

The OptimalSpeed® system is a unique selling point of Knotex machines from Groz-Beckert. Here the computer takes over the adjustment of tying speed in the warp. A microprocessor checks important parameters up to ten times a second and then automatically calculates the optimal tying speed for the respective warp.

An important technical feature which can be supplied for nearly all models is the yarn break detector. Behind this development is a comprehensive control device for correct knot forming. If for any reason a knot is not created, the yarn break detector notices this right away and switches the machine off - a very important contribution to perfectly-tied warps. The tying machines in the Fischer-Poege series from Groz-Beckert are also equipped with this technology.

Both product ranges can also be equipped with electronic double yarn detection for warps without a lease, for cotton weavers and Denim weavers. With good warp preparation the double end detector enables a significant improvement in tying results. The tension of every single thread is measured by sensors.

Both warp-tying machine systems can today be used universally on the tensioning system of the Fischer-Poege frame from Groz-Beckert, in warp widths of 60 - 560 cm. The frames of the Knotex System used until now are still available from Groz-Beckert, however. Depending on the yarn, the brush-roller set consists of up to five suitable brush qualities. 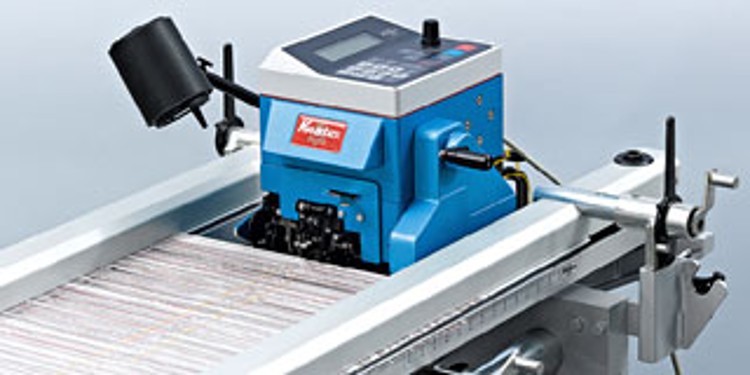