Techtextil 2013: A great success for Groz-Beckert

Albstadt/Frankfurt on the Main: At this year’s Techtextil in Frankfurt 1,322 companies from 48 countries presented their range of products and services. About 27,500 visitors from 97 countries came to the trade fair – a new record. For the Techtextil show, Groz-Beckert had a car specially prepared so that nearly all technical textiles in and around it were visible. On the 276 m2 booth, the exhibit named TexCar attracted a large number of visitors, namely 2,600 from 60 countries. In addition, an "insertion competition" with the new NeedleMaster was organized at the Groz-Beckert booth. The three fastest participants were rewarded with prizes.

The Groz-Beckert NeedleMaster is an equipment for nonwovens manufacturers that enables an efficient insertion of needles into the needle boards. The insertion can be done at least three times faster than by hand, depending on the needle board spacing. In order to show how fast one person can insert the needles with this system, Groz-Beckert hosted the "insertion competition" at its booth. More than 40 participants tried to insert 140 needles into a needle board row as fast as possible. In the end, with a time of 1 minute and 8 seconds, Fabian Wolf (TU Dresden) won the first prize, an iPhone 5. The second prize, an iPad, went to Fabrice Lorenzi (Faurecia), and the third prize, an iPad mini, went to Daniel Toncelli (Laviosa Chimica Mineraria).

In the center of the trade fair appearance stood the TexCar, that demonstrated trans-technologically which textile end products can be made with Groz-Beckert products. For this purpose, a Mercedes E-Class T-model was completely disassembled and cut open at the crucial parts. At the finished TexCar almost all textile applications were unveiled and visible. It showed at which parts in a modern car nonwovens, knitted or woven fabrics or tufted products play an important role. On top of this, the car stood on a bridge section, made of textile-reinforced concrete. A video explained the car in more detail. It demonstrated the functions of the textile elements in the car. Another video featured the development of the TexCar from the planning, to the cut, to the finished exhibit. Both films will soon be available on the Groz-Beckert website.

The TexCar sprang surprises, since textiles can be found in a car where one would not expect them. One example are the cut open carbon brakes where nonwovens can be found. Another example is the safety belt. The woven polyester band has linked belt edges, and the bar tacking is a sewing operation. 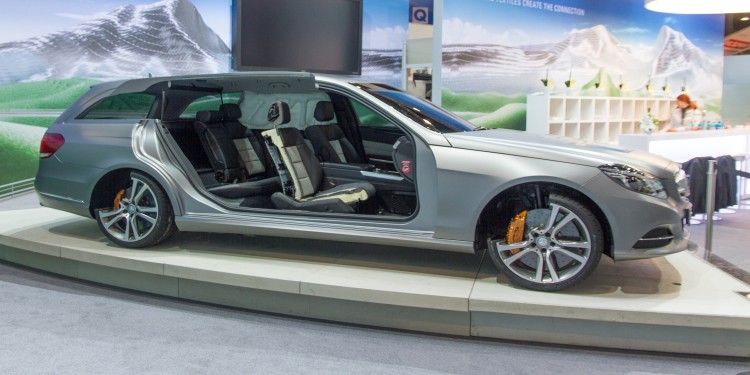