Thousands of years ago various different natural materials were being used to reinforce soil - straw, for instance, or reeds. The basic concept has remained unchanged till the present day - but modern methods and materials can hardly be compared to the technology used in the old days. Wood, stone, concrete or perhaps cotton were the preferred materials in highway construction during the 20th century; today we usually use synthetic polymers, also known as plastics for short. 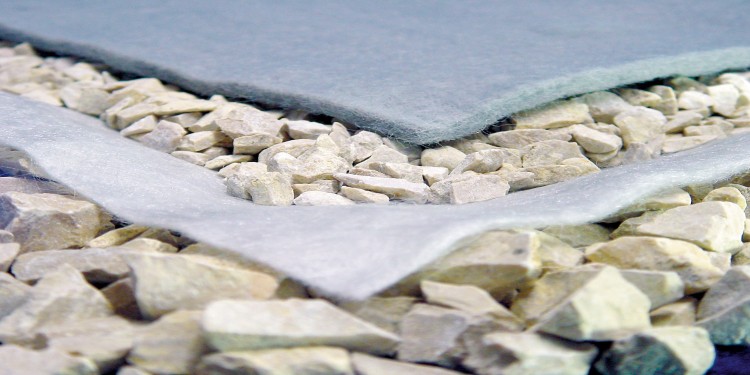 In this regard, we talk of so-called geoplastics. These took very little time to fully establish themselves because of their diversity and flexibility. They also bring benefits in cost terms: thanks to geoplastics, we can make major savings on construction materials such as sand, gravel or clay. Geoplastics (GSY) are initially differentiated in their properties as permeable or impermeable media according to DIN EN ISO 10318. Among geo-membranes (GMB), geosynthetic clay liners (GCL) are considered to be virtually impermeable. The permeable materials are geotextiles (GTX) and geotextile-related products (GTP).

Nonwovens made of natural fibres can also be classified as geotextiles, because weatherproofness is not always required. Natural geotextiles are used in particular for erosion protection. The objective here is to protect a slope or embankment from natural soil removal until natural greening has taken place, after which the geotextile is no longer needed. Geotextiles made from natural fibres are biodegradable - which makes them especially suitable for these purposes.

With regard to classification and terminology, the rules of certification bodies and norm committees are not always taken into account. Geosynthetic clay liners or geonets, for instance, are generally regarded as geotextiles as well. In this regard there are several ways of classifying geotextiles. Subdividing them can be done according to their type of structure, their sphere of application or their particular function.

Classification according to structure

Classification according to purpose

Geotextiles are predestined for numerous applications:

Classification according to function

Geotextiles have to satisfy several different requirements at the same time. These include separation, filtering and drainage, whereby mechanical stress generally reaches the limits of resilience. What a geotextile can and cannot do is ultimately decided by the so-called geotextile 'robustness categories'. The first job is to establish which category a geotextile comes under.

During the testing, the following methods are used:

In the production of geotextiles, all textile production methods are in effect possible. The key factors here include economic efficiency, productivity and physical properties. As a result, nonwovens are primarily used because of their diverse potential. As composites they can consist of several layers, they can have an integrated multifilament layer for reinforcement, be filled with minerals, or simply be an ordinary needlefelt without backing. Reinforcement is done either chemically, thermally or mechanically, or via a combination of these three methods.

The high demands placed on the physical properties of the textile surface automatically require state-of-the-art production methods. Use of the right machines and tools plays a crucial role here. For this reason Groz-Beckert offers you special felting needles that are incomparable in terms of their long service life and high productivity.