The textile world at a glance: From art to history

Even today, clothing is still one of our three basic needs as people, in addition to food and shelter. Originally used as protection against environmental influences such as rain or cold, today clothing also serves to communicate a message, to protect against other dangers, and also as a means of self-expression. Sewing and sewing technology also developed along with clothing. Without this progress, we wouldn't have the clothing that we know today.

The history of clothing

Many thousands of years ago, humanity lost its fur coat in the course of evolution. This was advantageous in that the body temperature could be more easily regulated, but was also detrimental because there was no protection against the weather. Thus, people began to place crude skins on their bodies in order to protect from the sun, cold, and rain.

The first production of clothing was around 35,000 years ago: Body coverings were created from animal skins, hides, tree bark, or animal fibers.

Production of clothing many thousands of years ago

The effectiveness of clothing increased dramatically with the invention of sewing around 30,000 BC. Clothing could now be seamed and adjusted to fit to the body. At that time, fishing hooks and bone were used as needles. Leather strips, sinew, intestines, or bast served as fibers, being pulled through a hole on the head of the "needle".

Even at the beginning, clothing items also served as a means for self-expression or a status symbol, in addition to protection. Thus, special attention was paid to color, shape, and pattern. For example, certain furs and pelts were reserved for the successful hunter or group leader.

Then, about 5,000 years ago, sheep were discovered as a source of wool. With the help of weaving technology, which by then had been known for some time, wool could also be used as a resource for textiles, thus increasing the variety of materials used.

In antiquity, how clothing was used changed gradually: It was less and less necessary as protection against the weather, and therefore primarily became a way to express social position. Later, during the Middle Ages, not only did society change, but fashion did as well. The Church, which had become increasingly important, required people to conceal their bodies. This lead to long sleeves and trouser legs as well as shirts and undergarments.

During the 16th century, fashion was again subjected to great changes. Men in particular came to place great value on fashionable clothing. But there were also updates to the world of women's clothing: The classic dress was divided into two, and from then on consisted of a bodice and a skirt. Even the poorer segment of society began to dress in more imaginative and colorful ways.

Clothing during the Middle Ages

Today, clothing no longer serves only to protect against the weather, it also protects against other special risks, meaning bulletproof vests, heat and fire resistant clothing, or even regular protective work clothing, which should not be forgotten. So-called smart textiles are currently booming. These are intelligent fabrics with special functional properties. They may, for example, contain fibers that conduct electricity, microprocessors, or sensors that react to certain bodily functions and, when needed, emit corresponding signals or call emergency services.

The development of the sewing machine

With the beginning of the Industrial Revolution during the 18th century, social and economic relationships changed forever. The increased use of wool and the development of machines to prepare and process wool were important contributions to more effective production of clothing items. Nevertheless, at this time sewing was still done by hand.

In 1755, Charles Weisenthal invented a double pointed needle with the eye in the middle. This meant that one could pierce a material with the use of mechanical fingers. However, a complete machine to create a seam had not yet been invented. The foundation of this was first laid in 1790 by Thomas Saint, who invented a machine whose basic principles are still used today in sewing machines. This machine, used to produce shoes, worked with a hook needle and an awl.

The breakthrough in the invention and development of sewing machines came with Balthasar Krems' invention in 1810, a machine to sew hats and caps. This machine worked with a needle that had an eye located near the tip. This is also the case in today's sewing machine needles. Shortly thereafter, Josef Madersberger was the first to invent a machine that could create a complete seam. 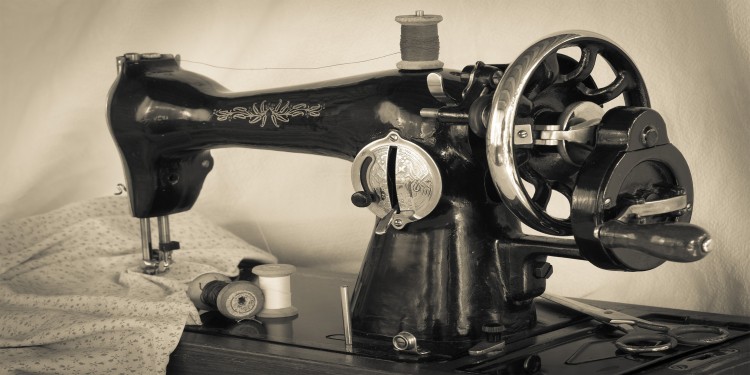 An additional step for the development of sewing technology was a machine that was invented by Walter Hunter in the year 1832. This worked with a needle with an eye point, as well as a shuttle that guides a second needle. A stitch was created using the needle and the shuttle, a stitch that shares similarities with today's lockstitch.

An additional "lockstitch machine" that could, however only create straight seams, was invented by Elias Howe in 1845. This was followed by the invention of the first truly functional sewing machine in 1851, developed by Isaac Merritt Singer.

With the increased quantity and diversity of clothing needed today, sewing technology has, of course continued to develop. Sewing machines that create up to 10,000 stitches per minute, or automatic sewing machines that stitch on a pattern according to a predefined computer program, are already part of everyday work. 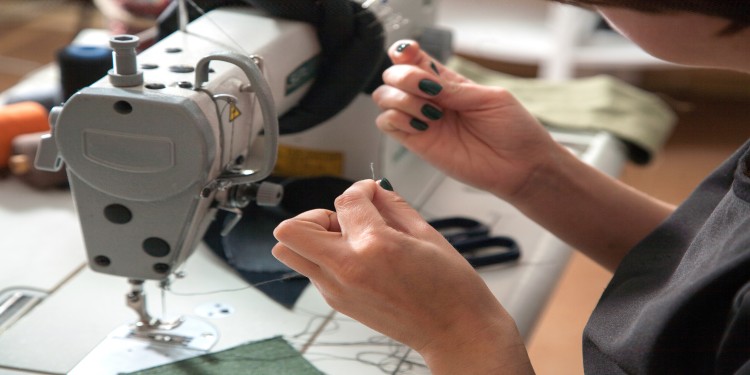 The development of the sewing machine needle

What's more, the based materials also changed: Though needles were initially made from iron, people quickly turned to steel, and more exactly, to wire. This made rust protection of supreme importance, so needles were coated with a layer of nickel. Today, it is common almost everywhere to coat sewing machine needles with chrome in order to protect them better from wear and damage.

With the acquisition of the sewing machine needle manufacturer Torrington in the year 1980, Groz-Beckert expanded its production program to include sewing and shoe machine needles. Today, the company is a leading provider in this industry. Numerous innovations and developments in the production process and to the needle itself have played their part in achieving Groz-Beckert's market position.

Always a step ahead

Groz-Beckert never stops: In order to always provide you, the customer, with a decisive competitive advantage, we keep an alert eye on developments in the clothing market and sewing technology, and are always working on further innovations with clothing and sewing machine producers. Additionally, Groz-Beckert is also always one important step ahead in the area of service: Whether it's online with the Customer Portal, which provides you constant access to Groz-Beckert's knowledge, or with the INH Quality Management system, which provides a standardized process and various tools for optimum handling of sewing machine needles while in use.

Do you have questions about the Sewing division of Groz-Beckert? Then the sewing experts will be happy to help you, anytime and anywhere.

In order to avoid injuries caused by residual parts of broken sewing machine needles in clothing items, it is sometimes necessary to search for up to 2 hours for needle fragments while sewing clothing. This search time is reduced by up to 90% by the INH Quality Management (Ideal Needle Handling) developed by Groz-Beckert.

We also use cookies for anonymous statistical evaluations with the help of Matomo. These can be accepted or rejected. Ignoring this banner is also classed as a rejection.